Green Party: Why You? Why Today?

Posted on January 28, 2016 by Krzysztof Lesiak | Leave a comment

In 5 short days, one of America’s great pieces of political Kabuki will play itself out: the Iowa caucuses.

Corporate media pundits can’t catch their breath, trying to predict the winners ahead of time.

Trump? Clinton? Sanders? Cruz? Is Jeb more than a zombie? O me, O my!

The corporate media (predictably) started ginning up a false horserace after the New Year’s Day football games were over to crank up ratings.

But… the truth for most Green voters is… who cares?

This is not to say that politics is unimportant. Far from it.

As annoying and predictable as duopoly politics is, what’s critical is to stay engaged and refuse to walk away.

It’s tempting. Believe me, we know. Life would be much simpler if we could all just get back to our private lives.

But the stakes are too high.

It’s also working with other nations to combat the global warming to preserve a planet that will support human life.

We know. As Greens, we hear the clarion call of the various crises upon us on a daily basis.

But here’s the deal: In 2016, GPUS is running candidates at the local, state, and federal level. We’ve continued to build our infrastructure and capacity to create electoral change

We’re not giving up.

Why? Because in many ways, the success of a new political party is about timing. We believe change is inevitable. When a tipping point is reached, political change can happen very rapidly.

Consider the Republican Party. Hard to remember, but it began as a radical anti-slavery movement.

The Republicans emerged in 1854 to combat the Kansas–Nebraska Act, which threatened to extend slavery into the territories. The new party also wanted to see a vigorous modernization of the economy (does this sound familiar… like the Green New Deal vs. petroleum?).

The nascent party had almost no presence in the South, but by 1858 in the North it had enlisted former Whigs and former Free Soil Democrats to form majorities in nearly every state north of the Mason-Dixon line.

With the election of Abraham Lincoln in 1860, and his success in guiding the Union to victory and abolishing slavery, the Republicans became the dominant political party until 1932 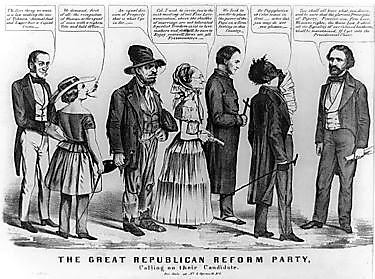 Quite a difference from today’s Republicans, which writer E.J. Dionne suggests have become the logical extreme far right conclusion to the ideas of conservative icon Barry Goldwater.

But here’s the important thing. The new Republican party literally blew away the Whig party, which self-destructed because of internal tension over the expansion of slavery to the territories.

The Whigs were so wracked with division that the anti-slavery faction prevented the nomination of its own incumbent, President Fillmore, in the 1852 presidential election. Most Whig Party leaders eventually quit politics (as did Abraham Lincoln, temporarily) or changed parties.

By the 1856 presidential election, the Whig Party was defunct.

We know it’s a bit tedious to review American political history. But at this exact moment in our nation’s politics, it bears a close look.

It may well be that we are looking at the imminent destruction of the Republican Party. If they are so tired and worn out, so wracked by culture wars, that they can’t offer up a more credible candidate than Trump, their malaise runs far deeper than having an off year.

At the same time, the Democrats face a choice between establishment favorite Hillary Clinton and insurgent Bernie Sanders. Running as a Democrat has allowed Sanders to put important issues like single-payer health care on the table.  Yet what he calls “revolution” also includes his pledge to support Hillary if he loses the nomination. Can he bring all his supporters on that trip? Or will his choice splinter the Democrats and give Greens the opportunity to pick some of them off to help build a real revolution?

Like the Republican Party in the 1850’s, who were ridiculed as being part of the lunatic fringe, today the Green Party’s positions and solutions are ones the majority of Americans believe in.

So to answer the first question, “Why You?”

Well, you’ve raised your hand as a Green. YOU are the change we all seek. Without you, and the work and support of every other Green, our dream of a Green world will soon be found in a dusty footnote in an obscure political science text.

You can stay at home and watch as someone from the duopoly wins the presidency this year and tell yourself that there was nothing you can do. You can give up, like the long-dead Whigs.

Or you can meet the challenge with your heart, soul, time, and financial resources to be part of a new, Green history that’s writing itself every day.

And to answer the second question, “Why Today?”

Because Americans need change. We are that change. We must all give and act for the greater good.

Today is your day to give. No political party has ever been fashioned out of good intentions. Vision + hard work + money is pretty much the recipe for success.

Many Greens have been patient a long, long time. We think of Jody Grage, up in Washington state. Now 80 years old, she’s been a GPUS activist for over 30 years. Year in and year out, she works on the ballot access committee to help make sure GPUS candidates can run across the nation.

We know she’d like some help. And she’s always among the first to help raise money.

So here’s a sweet opportunity: We have 3 of Jody’s hand-knitted green winter scarves left. The first 3 people who give $100 each can claim a scarf.

They’re beautiful, warm, perfect for winter wear, and they were created by hands that have held hope and helped create change for a long, long time.

The first ten people who give $100 each can claim a GPUS t-shirt.

And if you are one of the first ten people to give $50, you can claim a GPUS lapel pin.

Today is your day. Give what you can today. And if possible, please start a monthly sustaining donation to give GPUS the firm, predictable, financial foundation is needs.

And we need you. Get involved. A sea-change is upon us. Don’t be distracted by the Iowa Caucus circus. Give your time and talent today to help create the change our planet needs.

We’ll turn the world Green with your help!

P.S. We don’t take a penny from corporations or business—not even Green business! Ours is a clean-money party funded by people like you, and 100% owned by our conscience—not a super PAC, a gaggle of millionaires, or a billionaire with a God complex. It’s up to us. Please give today.

P.P.S. If you can, please start a monthly sustainer pledge of any amount. The number of monthly sustainers has skyrocketed by 70% in the last 8 months, proof positive of the power of GPUS ideas and candidates! But we can’t stop recruiting monthly sustainers until we’re fully funded. Please thoughtfully consider if you can give monthly!