Posted on February 2, 2016 by Krzysztof Lesiak | Leave a comment

Overland Park, KS – How powerful can social media be for the 2016 Presidential Election?

On January 29th Presidential Candidate Austin Petersen went live on Facebook reaching out to Glenn Beck about Donald J. Trump. Petersen discusses the need to form an alliance outside the two major parties if Trump ends up facing off against Hillary Clinton. Additionally, Petersen proposes to build a coalition alongside National Review conservatives that could actually have a credible chance of beating both Trump and Hillary.

Petersen’s livestream video filmed on Friday, January 29th has already been viewed 60,000 times on Facebook and can be viewed on YouTube by clicking here.

Glenn Beck understands the type of problems we face this upcoming 2016 Presidential Election.  Shortly after Petersen reached out to Mr. Beck, he responded with the message below. 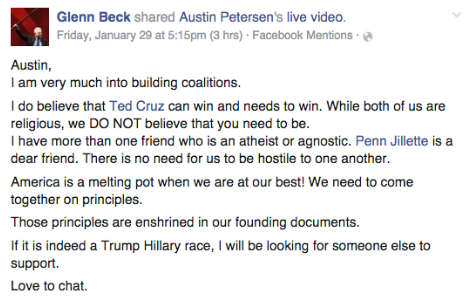 Petersen is available for an interview on this topic, and will be in New York City on Tuesday February 1st, and Wednesday February 2nd. Availability is limited so please contact our campaign immediately at or call .