Posted on February 27, 2016 by Krzysztof Lesiak | Leave a comment 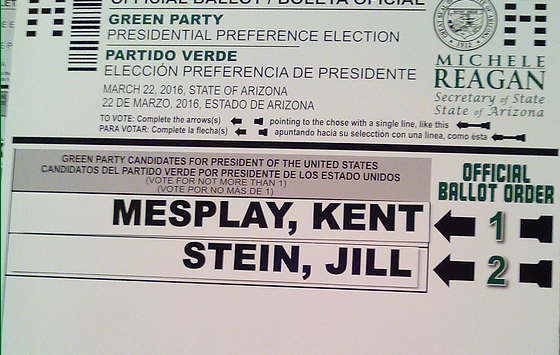 Dr. Jill Stein is a mother, physician, a teacher of internal medicine, and an environmental-health advocate from Lexington, Massachusetts. She is a member of the Green-Rainbow Party of Massachusetts. Jill was the Green Party’s presidential nominee in 2012. In addition, she was her state Green Party’s candidate for Governor in 2002, a Green Party candidate for State Representative in 2004, and a Green Party candidate for Secretary of State in 2006. Dr. Stein stated, “A political revolution is stirring in America as people look for alternatives to a political establishment that has failed them. As the only political party that has not been poisoned by corporate money, the Green Party provides a new way forward. Our very survival depends on building new Green alliances that value people, planet and peace over profits.”

· Recruit volunteers, supporters, and donors for their respective campaigns

· Get Out the Vote (GOTV) amongst Green Party voters for the Arizona Presidential Preference Election on Tuesday, March 22, 2016.

Seating is limited for the March 12th Town Hall, so folks interested in attending are encouraged to register/RSVP using the Eventbrite link: https://www.eventbrite.com/e/green-party-presidential-candidates-town-halldebate-tickets-21839799428. For more information, call the AZGP voicemail at (602)417-0213, or e-mail: .

The mission of the Arizona Green Party (AZGP) is to build and sustain an alternative, progressive political party that promotes and practices the Ten Key Values. We do not accept corporate donations and uniquely rely on the generosity of individual donors and volunteers. The four pillars of the Green Party are: Grassroots Democracy, Social Justice, Ecological Wisdom, and Non-violence.