The following was posted on the Green Party’s website on February 28th, 2016: 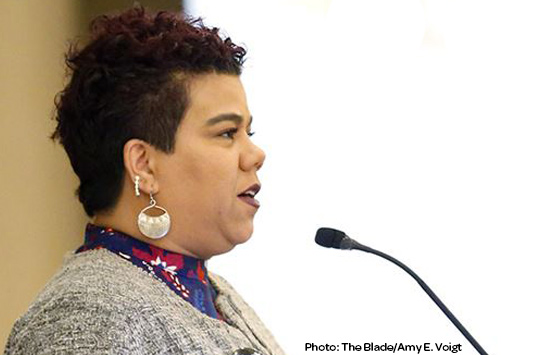 A black and Puerto Rican community organizer, writer, and lecturer from the Bronx in New York City, Ms. Clemente also founded and is president of Know Thy Self Productions, which consults on a broad range of topics such as third-party politics and engaging young voters of color.

Her bipartisan attack took aim at Donald Trump, the front-runner for the Republican presidential nomination, as well as Hillary Clinton and Bernie Sanders, both vying for the Democratic nod.

“A xenophobic, racist, misogynist is about to potentially win the Republican nomination, and on the Democratic side either way, man, that Democratic party all they’ve done is use our people for their votes,” she said.

Ms. Clemente urged the students to think critically about what’s going on not far from campus. She pointed out that the November, 2014, shooting death of Tamir Rice, a black 12-year-old who was playing with what turned out to be a pellet gun by a white police officer happened in Cleveland.

In Flint, Mich., about two hours north of Bowling Green, a switch in the water supply led to lead contamination causing an ongoing crisis in the city of about 100,000 with a sizable black population.

Organizers said the conference, held toward the end of Black History Month, is one way the university works to address challenging topics.

Angela Nelson, interim chair for BGSU’s department of ethnic studies, said the event gives an opportunity to bring black issues to the attention of the campus and noted the timeliness of the topics in a presidential election year.

This entry was posted in Green Party and tagged Green Party, Rosa Clemente. Bookmark the permalink.