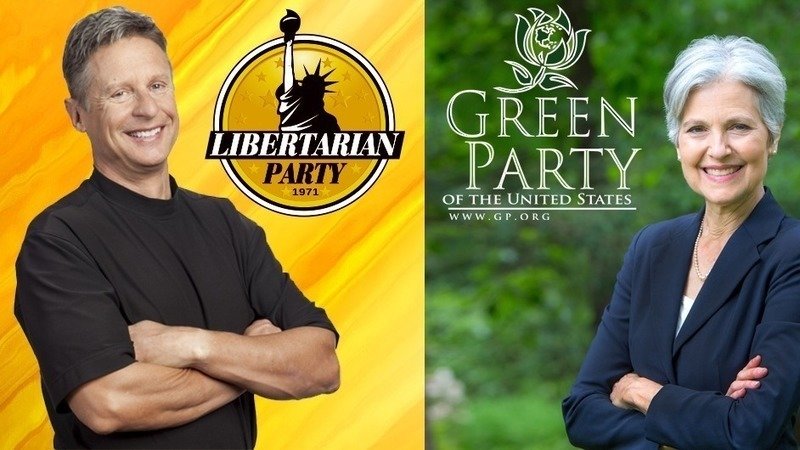 The above photo accompanied the petition

Three days ago, A Libertarian Future started a Change.org petition urging CNN to invite presumptive Libertarian Party and Green Party presidential candidates Gary Johnson and Jill Stein to its Democratic and Republican presidential forum. As of 1:08 PM CST today, the petition has garnered 944 supporters. The text of the petition is below:

CNN recently announced they would hold a joint Republican/Democrat Party Presidential forum this Monday. They deserve praise for taking the initiative to hold the first multi-party Presidential forum of the primary season. This television event will surely see impressive ratings but they are still missing out on tens of millions of independent voters. Although, there is an easy solution to this problem: invite Gary Johnson and Jill Stein.

Nearly 1.3 million people voted for Gary Johnson in 2012 and almost half a million voted for Jill Stein. Independent voters who were sick of the two parties cast their votes for the Libertarian Party and Green Party because they wanted something different. These voters and millions more are still looking for those same unique positions this election cycle.

These are potential viewers for CNN that the network has not had for their previous Republican and Democrat debates. Until now, Libertarians and Greens have watched their own debates separately. Independent voters haven’t watched the two parties debates either.

By inviting Gary Johnson and Jill Stein to debate CNN could absorb millions of new viewers. It would bring those audiences together for a true blockbuster event. A four party debate would be the ratings bonanza of the entire primary season and easily beat the most popular Republican and Democrat debates combined.

CNN would also get the jump on all of the other networks. This would be the first debate in two decades that included more than the same old two parties. They could make history.

The network should be able to see this massive ratings potential. They would break all time records just with the amount of press a four party debate would generate. The ratings would be legendary; they should not less this opportunity pass them by.

CNN should invite Gary Johnson and Jill Stein to their upcoming Presidential Forum Monday March 21st. They will gain millions of Libertarian, Green, and Independent viewers they’ve never had before.

We need to break the political duopoly held by the two political parties that are currently undermining their respective most popular candidates. It’s obvious that the current two party leadership holds views quite different than their supporters. There is no reason that the entire American populace should be represented by just two sets of ideas. Let’s have a conversation about a new mix of ideas. It’ll at least force people to rethink their own ideologies and…..who knows? We may have more closet Libertarians and Green Party peeps than we think. This would be a step in the right direction.

Neither the Democrats nor Republicans are offering acceptable candidates this cycle.

The two-party political system does not fully represent all Americans. That is why this nation is witnessing a record high amount of Independent voters.