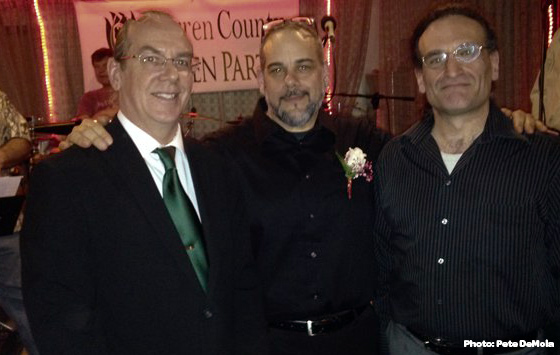 The pair rolled out their campaigns Saturday as part of the Warren County Green Party’s “Green Gala.”

He currently serves as the treasurer of the Warren County Green Party.

Barkenhagen said Matt Funiciello’s 2014 Congressional campaign acted as a catalyst to organize a local party committee, which is now affiliated with the state organization.

Citing the ongoing crisis in Hoosick Falls in which the village’s water system was found to be contaminated with a carcinogen, Barkenhagen called for the state to test the water in every municipality.

“New Yorkers need to know the water they are drinking is safe,” he said.

Barkenhagen did not mention Stec, who was first elected in 2012.

“The outsiders are in and it’s time to make some changes.”

Stec has formally announced his plans to run for a third term.

“I welcome Mr. Barkenhagen to the campaign,” said Stec. “I look forward to my continued work for and with the residents of this district and to seeking their continued support.”

“Those of us who believe in peace and justice need a new home,” said Ruzbacki to cheers. “Be brave and vote Green.”

Little was first elected in 2002. Ruzbacki’s entry to the race marks the first time the lawmaker has faced competition since 2006.

A spokesman for Little said while she has not formally announced her re-election campaign, she is running for an eighth term.

“It’s terrific to have that,” Mattera said. “It’s a testament to their great organizing skills.”

The Green Party is also fielding a pair of downstate candidates to replace the seats vacated by former senate majority leader Dean Skelos and assembly speaker Sheldon Silver upon their felony convictions on a series of corruption charges last year.

As part of their platform, the Green Party does not accept corporate donations.

Mattera admitted fundraising presents a challenge. But having a trio of local candidates who are known and present in their communities will help.

“I really feel positive about the candidates and how they will touch the voters one by one,” Mattera said.