Green Presidential Candidate to be on 2016 Georgia Ballot 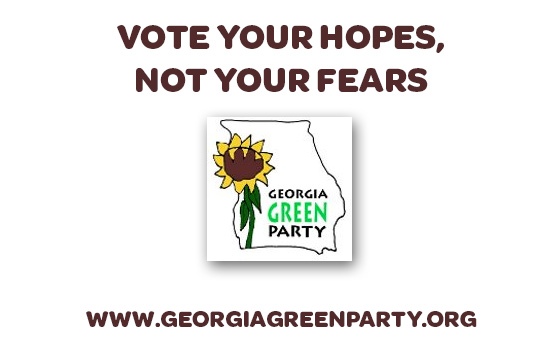 The following is a March 17th, 2016 press release from the Green Party:

The Court found as the Green Party had urged in its pleadings that strict scrutiny applied, applied that judicial standard to find the ballot access barriers unconstitutional and proceeded then to analyze the same facts under a rational basis standard of review to reach the same conclusion.

“You can’t vote for an antiwar candidate, a peace and justice candidate if state laws keep peace and justice candidates off the ballot,” said Bruce Dixon, CoChair of the Georgia Green Party. “You can’t vote for a candidate opposing Common Core and school privatization, if those are not allowed on the ballot. Up till now, Georgia’s Democrats and Republicans have colluded to restrict the choices of voters by keeping other parties and candidates off the ballot.”

Georgia Green Party and Georgia Constitution Party v Secretary of State was first filed in 2012 by Decatur attorney Mike Raffauf, and was originally dismissed by Judge Story on a motion from the state for Summary Judgement. The Plaintiffs took the case on appeal to the Eleventh Circuit Court of Appeals. The case is now back in the Northern District on remand to conduct a ‘balancing test’, with Plaintiffs represented by Laughlin McDonald of the ACLU Voting Rights Office.

“Today’s decision goes a modest distance toward allowing Georgia voters to vote their hopes and not their fears, at least in presidential elections,” said Dixon. “In the future we hope to force that door open further, and to extend this right to Georgia voters electing members of Congress, the legislature, and constitutional and county offices.”

“Ballot access barriers were enacted with the exact intentions which drove poll taxes, literacy tests, all-white primaries and lynchings for those who would integrate them,” said Hugh Esco, Co-Chair of the Georgia Green Party. “Today Judge Story has helped us dismantle another of the bricks left standing in Georgia’s Jim Crow legacy; one which has silenced the voices ready to offer a path forward from the crisis we face while the legacy parties squander resources on immoral wars of foreign aggression, sacrifice our health for the profits of the insurance, pharmaceutical and agriculture industries and our policy makers continue to bury their heads on the impact of global warming.”

With Judge Story’s order the Party will now be required to collect 7,500 signatures in order to place its Presidential candidate on the 2016 ballot. Without the order, the Party would have required close to 52,000 signatures to accomplish that end. The Green Party has 117 days to collect and file those signatures.

Citing an affidavit filed in the case, Judge Story’s order stated: “Plaintiff the Green Party puts it plainly: ‘As Greens we believe we’re prepared to help address our communities and our nation’s problems. The people of Georgia deserve an opportunity to tell us if they agree.'”