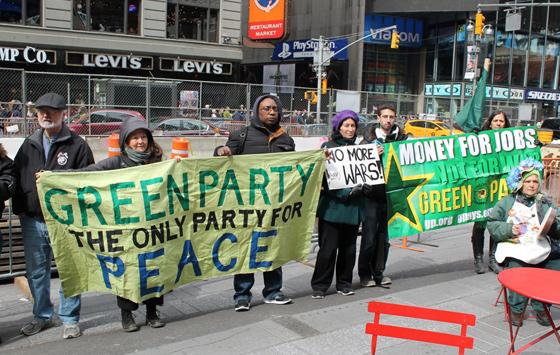 The Green Party of Brooklyn joined anti-war and veteran’s groups this past Saturday, March 19 for a silent vigil on the 13th anniversary of the war against Iraq. Join us this spring as we ramp up actions and organizing in preparation for electoral campaign fever!

Join local Green Party activists to discuss what’s happening in the world of politics or get more information about the party and its 2016 candidates over a drink.

GPBK delegation to the State Committee has two female seat vacancies. Nominations are open to registered Greens in Brooklyn. Please respond to this e-mail if you have a nomination to make.
Green Party of New York Presidential Nominating Covention

Mark Your Calendars for Saturday, June 11 in Troy at the Oakwood Community Center. Make sure to sign up for email alerts from the Green Party of New York at gpny.org