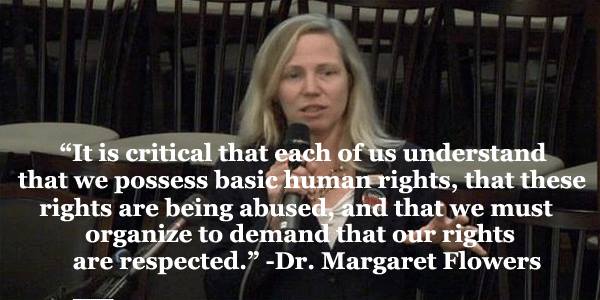 Margaret Flowers, the Green Party candidate for U.S. Senate in Maryland and a co-chair of the next month’s Green Party national convention in Houston, published the following statement on her website on July 12th, 2016, following Bernie Sanders’ endorsement of Hillary Clinton:

Today, Senator Sanders announced his official endorsement for Hillary Clinton as the presidential nominee for the Democratic Party. This act elevates the importance of building the Green Party and supporting Green campaigns.

Without Senator Sanders in the race, the two corporate party candidates are both dangerous for our health and welfare. Clinton is the candidate of war, Wall Street and Walmart. We can expect her to continue to be belligerent towards Russia, to favor the interests of her wealthy donors and to promote policies that continue to drive the race to the bottom in worker rights and wages at home and globally. Trump is blatantly racist, and while he sometimes speaks populist language, we cannot trust him to make decisions that protect human rights.

Sanders will be able to continue to play an important role in the Senate. I have worked with him and his staff on health policy, specifically on a national improved Medicare for All healthcare system. Most people are not aware that we got a single payer bill to the floor of the Senate for three hours in December, 2009 for the first time in US history. This happened because of popular pressure on Senate leadership to allow it to come to the floor after they skipped over it.

I am the only candidate in the Maryland senate race who has proven on issue after issue – from single payer health care to the Trans-Pacific Partnership to net neutrality to the climate crisis – that I will stand up to powerful industries and even risk arrest if that is what it takes.

Our fight for human rights and to protect the planet is critical at this point in history.

Join us in building our people-powered campaign. Sign up to volunteer and donate if you are able. We must be in this together.