Green candidate: Significant changes need to be made to Baltimore Police

Margaret Flowers is the Green Party candidate for U.S. Senate in Maryland. She published the following statement on her website on August 11th, 2016:

The Department of Justice’s report on the investigation of the Baltimore City Police Department (BCPD) validates concerns that have been raised by many, especially since the murders of Tyrone West and Freddie Gray, and demands major restructuring. If changes are made in a way that upholds the law and ends racial bias and police brutality, they could have a significant and positive impact on the health and well-being of our communities.

The Department of Justice’s findings clearly show that BCPD routinely violates Constitutional rights and federal anti-discrimination laws. This behavior goes back for decades. In the early 1970s, Maryland was the first state to pass a Law Enforcement Officers Bill of Rights, granting special privileges to police that civilians do not have. When Martin O’Malley was mayor of Baltimore and beginning his campaign for governor, it was his policy of mass arrests without probable cause that locked up over 100,000 people, almost 1/6 of the city’s population, in one year. 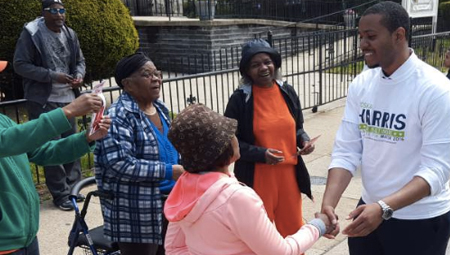 Ultimately, the responsibility for these violations falls on the mayor. It is time for accountability. It is time to end almost 50 years of failed policies under Democratic administrations in Baltimore. We need leaders who will challenge the status quo. That is one of the reasons that I support Joshua Harris, the Green Party candidate for Mayor of Baltimore. He works in communities of color to build youth leadership and to fight alongside them for the resources they need to create jobs and social supports. He understands the connections between over-policing, economic insecurity and safety.

Here are changes that I advocate:

Reduce spending on the BCPD: The BCPD is slated to receive $480 million next year. The police budget has been growing while the budget for the health department, which only receives a third of what the police receive, has been shrinking. It is time to turn these budget priorities around. The fact that the BCPD is using helicopters to enforce minor nuisance laws means their budget is out of control. Baltimore expects to spend $5 to $10 million a year to meet the requirements of the DOJ’s report. Rather than taking that away from necessary programs, as the mayor advocates, this must come by streamlining and shrinking the BCPD budget.

Retrain officers to serve: BCPD officers are being mis-trained to have a military mentality, which treats civilians as enemies, rather than a public service mentality. Warrior training escalates tension for both officers and civilians. New training must prioritize de-escalation of encounters and a reduction in the use of force. In addition, there need to be more mediators in communities and mental health professionals who can manage encounter people in crisis better than police.

Re-prioritize law enforcement: At present, BCPD officers patrol neighborhoods and detain people whom they deem suspicious which can mean doing nothing illegal as a person of color. This does not make our communities safer. In contrast, arrests without probable cause sow mistrust of police in communities and have negative impacts on victims’ abilities to find jobs or go to school. There should be a greater priority placed on violent and property crimes and much less emphasis on nuisance crimes. This will focus police activity in a constructive way and decrease harassment of people in their daily activities.

Community control of police: Lack of accountability for officers who abuse their power has created a culture of impunity. People who interact with police in their communities know who the abusive officers are. There must be a mechanism where civilian complaints can be filed in an effective process that is transparent and accountable so that members of the community know how a concern is being addressed and that gives the community control over deciding which officers can serve on the streets and which can’t.

There are other cities who have faced similar difficulties and successfully turned their police departments around. One is the city of Richmond, California, which took serious steps to increase transparency, accountability and community involvement under the leadership of Green Party Mayor Gayle McLaughlin. Richmond created a ‘culture of peace’ in their city. It’s time for Baltimore to do the same under the leadership of Green Party candidate for Mayor Joshua Harris.