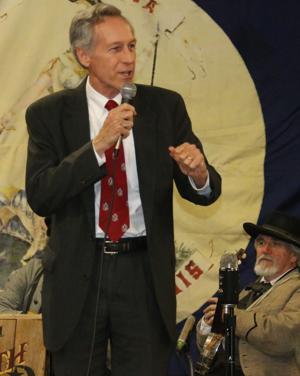 Former Congressman Virgil Goode, who was the Constitution Party’s presidential nominee in 2012, has become a campaign official in Donald Trump’s campaign in Virginia. See this story.

Goode is still presently a member of the Constitution Party National Committee as well*. END_OF_DOCUMENT_TOKEN_TO_BE_REPLACED

Virgil Goode, a former Republican congressman from Virginia who served from 1997-2009, was the Constitution Party’s 2012 presidential nominee. He garnered 122,000 votes, or 0.09% of the vote nationwide. Recently, IPR reported that Goode endorsed Donald Trump for the 2016 presidential election and officially joined his campaign team in his home state. END_OF_DOCUMENT_TOKEN_TO_BE_REPLACED

Former Congressman Virgil Goode, the Constitution Party’s 2012 presidential nominee and member of the party’s Executive Committee wrote an editorial yesterday for Breitbart.com in which he endorsed the Republican Party’s 2016 front-runner Donald Trump for President.

Justifying his endorsement, Goode cites Trump as “the only candidate truly focused on reforming our immigration system.”  He says he agrees with Trump’s views on trade and believes Trump is the only candidate who can defeat Democratic front-runner Hillary Clinton in the general election…

Posted on August 9, 2015 by William Saturn | Leave a comment According to the Twitter feed of Politics1.com, former Republican Congressman John Hostettler of Indiana is “very interested” in the Constitution Party’s 2016 presidential nomination. END_OF_DOCUMENT_TOKEN_TO_BE_REPLACED